“Hair of the dog”… that morning after heavy drinking, when some may reach for a stale ale to recover from that vicious hangover.

Little do people know, they are using one of the homeopathic principles – “A substance (i.e. alcohol) that can cause a disease (i.e. hang-over) is also able to cure that disease”, Dr. Samuel Hahnemann (1755-1843) called it “Likes cure like”.

Due to poor irrigation, when malaria was rampant in many parts of the world in the 1800s, quinine was the drug used. Interestingly, when the British were in India, they added gin to the bitter quinine, creating the well-known Gin and Tonic, so, next time you see a bottle of tonic water, look at the ingredients, quinine is still there.

Hahnemann was so intrigued by how quinine helped with malaria, he ended up ingesting part of the plant that quinine was made from. He became violently sick, he had high fever, chills, headaches, sweats, fatigue, nausea and vomiting. A few days later he was well again. He repeated this experiment many times on himself and others, obtaining the same results. He concluded that the reason why quinine helped with malaria was because it was canceling the symptoms out, just like the “Hair of the dog”. He called the process “Proving” of a remedy.

Hahnemann died when he was 88 – the life expectancy at that time was around 30 years. During his long life he proved over 100 remedies by painstakingly recording all details of the symptoms associated with natural substances. He also found that the more remedies were diluted, the stronger they became. This phenomenon is counter-intuitive, however, it has been witnessed in most continents for hundreds of years. We are now starting that homeopathy works in the realm of nanotechnology:

We now have over 6000 remedies and we use expert systems to find the remedy that best matches the symptoms of the patient. Hahnemann discovered that poisonous substances, once diluted, are helpful when people are very sick. For example, you may have experienced food poisoning, during which you may have had cramping pain in the abdomen, sweating, vomiting, and restlessness. These are the symptoms associated with the remedy Arsenicum album or Arsenic trioxide. When people are suffering from food poisoning or stomach flu – it has similar symptoms – Arsenicum album is one of the remedies often prescribed, leading to recovery.

Homeopathic remedies are made from natural substances, like plants, animals, minerals, and gasses. Due to their dilution, they are safe, they are not toxic and not addictive.

Feel free to call me if you would like to know more about homeopathy. 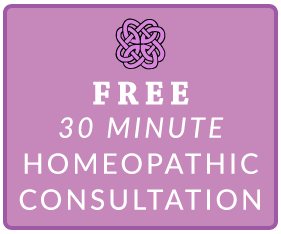